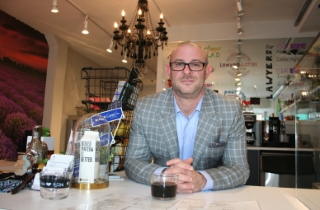 It’s the only law firm around where one can tuck into a barbecue chicken wrap and pumpkin spice latte while getting divorced, drafting a will or dealing with a tax dispute.

This is what is being offered at Toronto’s Lawyers & Lattes Legal Café, a fledgling business that combines a variety of legal services with the breezy ambiance of a bistro-esque gathering spot.

Described by its proprietor as “Canada’s first legal café,” it opened its doors Oct. 29 in the city’s bustling Yonge St. and Eglinton Ave. area.

It is the brainchild of Dale Barrett, an entrepreneurially minded tax lawyer who saw a need for an “accessible” and “affordable” alternative to the conventional law office.

“I wanted to do something different — something in the retail sphere — for a while,” said Barrett. “The idea to do a café came maybe a year ago. I wanted to do something where things were easily accessible, where people could come in and get some kind of service, get it quickly, get it affordably, get it on-site without having all the formalities you normally have when you procure legal services.”

Barrett, who was a software developer before studying law at McGill University, told The Lawyer’s Daily he “wanted to bring legal services to the community, to make them less mysterious.”

“Going to see a lawyer is like going to see your oncologist,” he said. “Regardless of the outcome, positive or negative, you’re having a stressful day. We’re not so special as lawyers. Take the ego out of it.”

“There is a preconceived notion that a law firm should be stuffy and fancy and very proper, and certainly [there would be people who] would see me right now … dressed sort of half business and half casual, they would think that I was ill-equipped to deal with their legal issue properly. … But there is some education to be had. More and more, people are going to be seeing that legal services are going to be offered in different environments.”

The café is part of an emerging movement toward more accessible legal services, said Barrett, pointing to Axess Law, which has offices in Walmart and the Real Canadian Superstore, and Jane Harvey Lawyers, which has stationed many of its offices in shopping malls.

Both in the café and on its website is a menu of fixed prices for various legal services covering family law, tax, wills and estates, rental and property and business dealings. Barrett said it has also started seeing clients about some civil and criminal matters.

As for noshables, it offers specialty coffees, teas and snacks such as almond Thai chicken salad, wraps, Mediterranean chickpeas and macarons tasting of salted caramel, tiramisu and pink champagne.

There are at least two lawyers on-site at any given time. Barrett and another lawyer take turns in handling tax and “corporate commercial” matters, while another handles intake, performs triage and gives general legal advice.

For other areas of practice and more serious matters, the café has a stable of 50 lawyers acting as “subcontractors.”

“What we have at this point is a great network of lawyers who can provide all kinds of services that we can’t provide in an hour or two hours,” said Barrett. “Anything from a personal injury situation, to a criminal trial, to a civil lawsuit, to a divorce that is not so amicable. … We’ve got some technology we’ve produced that’s kind of like Uber for lawyers. Within our network, we’re going to post the jobs that need to be done and depending on who’s available … the project will be routed to one of those lawyers.”

Clients are charged $299 per hour for most services involving legal advice.

“Our [subcontracted] lawyers bill us less than that, and that's where the profit is generated,” said Barrett. “The client doesn't see anything except the $299 [per] hour billings. As volume increases, the odds are that there will be less reliance on these types of subcontractors, and we will be taking more lawyers onboard as actual employees of the firm.”

Lawyers, whether in-house or subcontracted, usually start client meetings at tables in the storefront café, a colourful space with chandelier lighting, a wall mural and menus scrawled in bright pastels above the coffee bar’s mirrored backsplash. At any point, meetings can be moved to a private setting.

Initially, the Law Society of Ontario had questions for Barrett.

“The law society initially [wanted] to talk to me about that name and they had a bunch of questions and they had never heard of such a thing before,” he said. “They were trying to figure out what exactly it is we’re trying to accomplish here.”

Law society spokesperson Gelek Badheytsang said in an e-mail that “Lawyers and Lattes Professional Corporation holds a Certificate of Authorization” to practise law.

Badheytsang was asked if a firm such as this could improve access to justice.

“We encourage our licensees to make their services and the legal system accessible, approachable and user-friendly, provided that they don’t contravene any of our rules of professional conduct, especially with regards to marketing and advertising,” said Gelek. “Like any other professional corporation, its licensee shareholders are bound by the Law Society Act, the byLaws, rules and any and all other applicable legislation.”

Barrett was asked about concerns around confidentiality in an open café setting.

“The first question I always ask people, other than if they want a coffee, is, ‘Would you like to move this to the back?’ he said. “Confidentiality is not mine to waive, but it sure is theirs to waive. [But] if people want to sit there — and it has happened, people will want to sit there and discuss issues. For example, the things people are more likely to discuss out there is, ‘We’re starting a new corporation and we need the following corporate documents.’ No one cares. But you don’t want sit out there and discuss a custody battle or talk about things your spouse is doing to you.”

At that point, Barrett said, lawyers and clients could gather their food and drink and move to the café’s boardroom or back offices.

An increasing number of lawyers have expressed curiosity, Barrett said.

“We’ve had a couple of people come through here and try and figure out what’s going on, and we can spot the lawyers right away. … We can tell by the questions they ask.”

But most of those who have commented, he said, have been “encouraging” and “enthusiastic.”

“Then we’re going to start expanding across the country.”