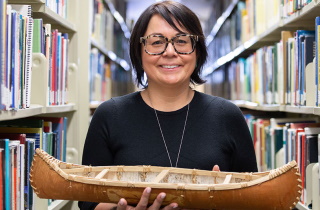 The University of Ottawa is launching Canada’s first French-language Indigenous law program in an effort to “help revitalize Indigenous legal systems and provide a more respectful welcome to Indigenous learners on an academic path in law.”

According to an announcement, released Jan. 21, the program will be offered through the school’s Civil Law Section and will be available exclusively to Indigenous students.

The program will offer “an introduction to the legal systems of different Indigenous peoples in Canada, which they will be encouraged to compare with Quebec and Canadian state-derived systems in certain key areas of law,” the announcement explained, noting that students “will thus be able to get to know the sources, foundations, principles and rules of Indigenous and of state-derived law, including Quebec’s civil law regime.”

Marie-Eve Sylvestre, dean of the Civil Law Section, told The Lawyer’s Daily that the certificate program is the result of “faculty engagement with teaching and researching in Indigenous law for over two decades.”

“In the 1990s,” she explained, the university offered “a pre-law program for Indigenous people who speak French.”

“They were coming from all over Quebec to Ottawa to [get an] introduction to law before they went into law school,” she said, noting, however, that the program was “not responding to the needs of the communities and of the students.”

“It was quite a shock to them to be introduced to state law. When you teach law you work from many assumptions,” she said.

For example, she noted, “in property law we take for granted that human beings can control and possess their environment and nature. And that’s pretty counterintuitive for many Indigenous people.”

Sylvestre said there was a lot of culture shock and the program was not properly introducing students to what the law is.

“So, starting in the 2000s we decided to have summer schools in the Indigenous territory, land-based teaching. We brought our students, including Indigenous students, who were happy to share that knowledge with us,” she said, noting that the summer school was about “Indigenous legal orders themselves and their rules and their norms, and their process of dealing with conflicts and other issues in their communities.”

“That really changed the paradigm and from that point on, our goal has been to produce more capacity building and train more people, including Indigenous professors, Indigenous scholars, Indigenous lawyers, so we could be able to teach more Indigenous law,” she explained noting that the new program is “the outcome of that process.”

Sylvestre noted that Indigenous law programs exist at the University of Victoria, Alberta, Lakehead and Dalhousie, but they’re all in English.

“There are some Indigenous communities, especially in Quebec, who were colonized in French, who speak French and who actually do not speak English at all. French is a second language already,” she said, stressing how important it was “to provide that access and be able to reach those communities.”

“We know Indigenous people who speak French are spread out all over the territory, especially in Quebec, so the program is going to be online so we’re going to be able to reach everybody where they are,” she added.

According to the university’s announcement, the program will “draw on Indigenous approaches, adopting experiential and holistic teaching methods and connecting interdisciplinarity and learning by doing.”

“Learning through observation, oral traditions, field stays and textual analysis will also be favoured. Courses will be given mainly by Indigenous professors. The presence of elders will be highly valued, with speakers who convey Indigenous culture regularly invited, to encourage the oral transfer of legal knowledge,” the announcement explained. 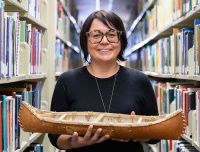 The program was initiated by professor Eva Ottawa, the announcement added, who is Atikamekw-Nehirowiskwew and a member of the Manawan community.

“Having taken the pre-law course offered by the Civil Law Section in 1999 myself, I believe that welcoming learners to the world of Indigenous legal systems will strengthen their cultural knowledge while supporting their academic progress and success,” said Ottawa in a statement.

“I’m hopeful that this program will be of use in all areas — personal, professional, community,” she added.

The program, which is one year long and is comprised of 30 academic units, was created with the support of Sophie Thériault, professor and vice-dean academic at the Civil Law Section, the announcement noted.

According to Thériault, “establishing this certificate is one more step on the road to reconciliation.”

“This unique program will further access for a greater number of Indigenous students to legal education and professions, which will deepen reflection on the interaction between state-derived and Indigenous law, as well as increase access to justice for Indigenous peoples,” she added in a statement.

Sylvestre also noted that the program is a response to the calls to action issued by the Truth and Reconciliation Commission regarding law schools.

Sylvestre said the program is currently “only open to Indigenous people” because “it’s important for them to reappropriate their own legal systems first.”

“I think we’re making an investment in Indigenous communities, but perhaps in the near future we’ll open some spaces for non-Indigenous scholars and future lawyers. And we also continue teaching Indigenous law in the context of our LLL [Licentiate in Law] or our J.D. program,” she added.

Sylvestre stressed that “Indigenous legal orders are the equivalent of civil law and common law.”

“They’re another legal tradition, another legal system, and more and more non-Indigenous lawyers and Canadians in general will have to learn those systems and deal with them and resolve conflict within those systems. So, it’s important that we give them the importance that they deserve,” she emphasized.

The program will begin in August 2022, the university’s announcement explained. The program has also “received the support of the Assembly of First Nations Quebec-Labrador and its Chief, Ghislain Picard, who sees it as an opportunity for Indigenous learners to study in a field that highlights their reality, opening a path to the study of Indigenous legal traditions.”

Photo credit: Image of professor Eva Ottawa used with permission from the University of Ottawa.

If you have any information, story ideas or news tips for The Lawyer's Daily please contact Amanda Jerome at Amanda.Jerome@lexisnexis.ca or call 416-524-2152.