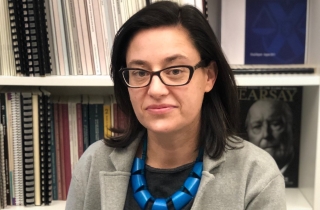 Nova Scotia has been pairing cutting-edge data gathering with old-fashioned legwork to address a lack of access to justice for the province’s most vulnerable — many of whom, it was found, have given up on the justice system.

Formerly known as the Law Reform Commission of Nova Scotia, the new institute was recommended in 2018 by Nova Scotia’s Access to Justice Coordinating Committee (A2JCC), a group that convened in 2014 in response to reports by both the National Action Committee on Access to Justice in Civil and Family Matters and the Canadian Bar Association.

Out of the A2J Institute comes #TalkJustice, an initiative aimed at examining barriers to justice, particularly when it comes to obstacles faced by marginalized groups, such as African Nova Scotians and Mi’kmaq communities, said A2J Institute executive director Ilana Luther.

A major part of the #TalkJustice initiative will involve the use of software called SenseMaker, which stores results from a survey in which people detail their experiences with Nova Scotia’s justice system.

“Part of the idea of SenseMaker is it is both a quantitative and qualitative data capture tool,” said Luther. “You ask open-ended questions: tell us a story; share an experience that happened to you or that heard about — positive or negative — that shaped how you see justice in Nova Scotia. … You allow the storyteller to give their experience a headline and then you ask prompting questions, which allows the storyteller to self-signify. The storyteller reveals to you the significance of their story to them.”

SenseMaker will present these answers to researchers in a way that shields the responses from being looked at through a lens of preconceived notions.

Luther went on to say that while the #TalkJustice survey is available to everyone, these vulnerable groups are the primary focus.

Outreach includes online and hardcopy versions of the survey, focus groups, the placement of posters urging people to participate and reaching out to shelters, family resource hubs and community centres.

Of the 221 stories gathered so far, 174 are classified as “negative” or “strongly negative,” said Luther, adding that one in three had given up turning to the justice system for help.

“The predominant emotions felt by these respondents were passive, so discouragement, helplessness and disappointment,” said Luther. “But we’re also able to look at the individual stories … and get practical information about what’s working and what’s not. We’ve heard a lot of good feedback about the importance of a good Crown, for example, a Crown that’s willing to help and support someone who is in the justice system.”

Of the respondents, 20 per cent “identified as being from an equity seeking group — Acadian, Mi’qmaw, African Nova Scotian, LGBTQI+, person with a disability, or newcomer,” Luther later said in an e-mail.

The rest, she said, were made up of a “broad swath” of people.

“Part of our mandate … is if we’re not addressing access to justice to the most vulnerable communities, we’re not addressing access to justice at all,” Luther said. “We’re trying to focus on the most vulnerable communities and we’re trying to focus on rural Nova Scotia. We reach out to service providers first — family resource centres, shelters, community centres — and then our access to justice co-ordinator sets up focus groups at those sites and interviews the users of those services and … encourages them to fill out those surveys.”

Michael Cheveldave, a lead trainer with Cognitive Edge, said SenseMaker places people’s survey responses against the backdrop of their individual situations and mindsets at the time of questioning.

“Context of experience is absolutely critical, so what SenseMaker does is it says, look, we need to actually absorb a diversity of situations,” said Cheveldave. “SenseMaker was based on [the] understanding that a lot of decisions are aided and facilitated by our day-to-day conversations … [and] is very situational and relevant to context and time of need. So, with that, SenseMaker was created to help understand perspectives and meaning of different situations across larger populations.”

“We’re looking for patterns across people’s experiences,” said MacNeil. “When we see patterns that we think are interesting, the software allows us to very quickly find those small clusters of stories. So, if we have10,000 stories in the database, it’s not like a qualitative project where a researcher would go and read all 10,000 items. … What we’re interested in is finding those quantitative patterns in the experiences and then using those stories to facilitate a conversation about what we should do next. That is essentially how SenseMaker works.”

MacNeil said that while SenseMaker is being used in several other jurisdictions for restorative justice projects, Nova Scotia is the only province he knows of that is using the software to examine access to justice issues.