A petition has been launched to support a Quebec senator’s bill to combat domestic violence and violence against women.

Bill S-205, which was introduced by Sen. Pierre-Hugues Boisvenu last November, would amend the Criminal Code’s provisions on interim release to allow for the use of electronic monitoring devices and court-mandated therapy sessions for alleged abusers, among other changes. The petition calls on the federal government to support and uphold Bill S-205 while also taking action to guarantee the physical safety of victims and on ways to raise awareness of family violence and prevent it.

It is sponsored by Conservative MP Karen Vecchio, her party’s shadow minister for women and gender equality and youth, who unveiled the petition at a press conference May 17 alongside Boisvenu and her colleague Raquel Dancho.

“We have seen victims of violence get caught in the middle of the justice system far too many times,” said Vecchio. “At the end of the day, it is our job to fix the system. It is our job to protect victims and ensure that our institutional systems are set up to serve and protect victims.” 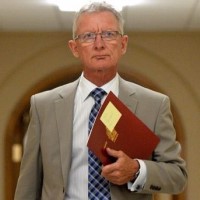 Based on a report from the Ontario Women’s Justice Network (OWJN), 173 women were murdered across the country in 2021, and 50 per cent of these murders occurred in a context of domestic violence, which represents 13 more women than in 2020.

Boisvenu, who founded the Murdered or Missing Persons’ Families’ Association after the murder of his daughter in 2002, said the petition “was launched to be signed by Canadians in solidarity with victims and their loved ones and with the objective of adopting this important bill.” And the association’s current vice-president, Geneviève Caumartin, said too many women are killed following their decision to leave a toxic relationship.

“We make a point to support the adoption of Bill S-205 and to invite the population to sign this petition to ensure greater protection for women victims of domestic violence and to save lives,” she said.

Bill S-205 has passed second reading in the Senate and is before committee.