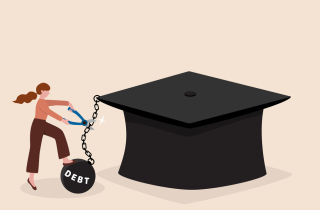 Lawyer licensing candidates in Ontario pay more than $90,000 in combined undergraduate and law school tuition fees to obtain their license to practise law. How do students who forego seven years of time and income afford to pay their tuition fees and living expenses given the time commitment and financial investment associated with becoming a lawyer? Student loans and private lines of credit.

A 2014 survey conducted by the Law Students’ Society of Ontario (LSSO) found that 64.4 per cent of law students relied on private lines of credit because government loans were not enough to pay for tuition fees and living expenses. By 2018, that number had risen to 75.12 per cent of law students surveyed. Most shocking of all, a 2019 Canadian Bar Association study found that lawyer licensing candidates in Ontario owe an average of $83,000 by the time they graduate from law school. The student loan crisis has an adverse impact on licensing candidates individually and on the legal profession more generally.

The expensive cost deters potential candidates from becoming lawyers. For instance, many intelligent students from lower income neighbourhoods may consider studying for three years at a cost of $20,000 to $40,000 to become a lawyer (as in Quebec or the United Kingdom). However, fewer are compelled to spend seven years at a cost of more than $90,000 to become a lawyer. While this affects the pool of licensees who enter the legal profession, it also exacerbates the access to justice problem because it is often the candidates that come from these lower income neighbourhoods who provide legal services to clients in those same underserved communities.

Candidates from lower income neighbourhoods are disproportionately disadvantaged when compared to their peers who can rely on financial support from their parents. Naturally, the candidates from lower income neighbourhoods and underserved communities who are not deterred by the expensive entry requirements start their careers with a lot more debt when they are finally able to provide their legal services to clients. The student loan crisis exacerbates the access to justice problem in at least three distinct ways.

First, these newly licensed lawyers are pressured to gravitate toward bigger cities because they literally can’t afford to work anywhere else. In other words, bigger cities like Toronto are the only legal markets where wages are high enough to help heavily indebted licensees service their student loans and pay their private lines of credit back.

Second, there is a long list of potential clients who have legal problems that must be solved but cannot afford to become clients because the cost of justice is too expensive. To put it another way, many prospective clients cannot afford the hourly rates or fixed-service fees charged by the heavily indebted licensees who have a duty to service their debts.

Third, the heavily indebted licensees ignore the underserved communities they come from because they can’t afford to work outside bigger cities like Toronto. This compounds the access to justice problem already faced by lower income neighbourhoods as well as underserved rural and remote communities.

While I have highlighted only three ways in which the student loan crisis exacerbates the access to justice problem in Ontario, there are countless more. The Law Society of Ontario (LSO) does not need to travel abroad for ideas on how to lower the debt burden imposed on its candidates and improve access to justice.

The LSO can look to its neighbour, the province of Quebec, for a compelling alternative. As I have previously argued, Quebec’s lawyer licensing process demonstrates that technical qualifications can be acquired in less than seven years of study and at a lower cost than that incurred by their Ontario counterparts. The LSO can also borrow from existing student loan forgiveness programs to alleviate student debt and improve access to justice in underserved communities.

In addition, Student Aid British Columbia offers a similar loan forgiveness program for recent graduates in select professions who agree to work at publicly funded facilities in underserved communities. Depending on the total number of hours of in-person service they provide, workers are eligible to have between 10 per cent and 20 per cent of their student loans forgiven.

Evidently, the LSO has a multiplicity of options at its disposal to reduce the debt burden imposed on law students and improve access to justice. Instituting a program that incentivizes newly licensed lawyers to spend time working in lower income neighbourhoods and rural and underserved communities by forgiving a portion of their student loans would accomplish both goals.

In the continued spirit of improving the mental well-being of legal professionals, the LSO should collaborate with the government of Ontario and the federal government to address the student loan crisis and improve access to justice in the province. Together, we can build a brighter future for all Canadians.

George Monastiriakos is an articling student at Delaney’s Law Firm in Ottawa, Ontario. His work has previously been published by Newsweek, The Institute for Research on Public Policy, The Globe and Mail, The Hill Times, and The National Interest. He can be reached on Twitter.