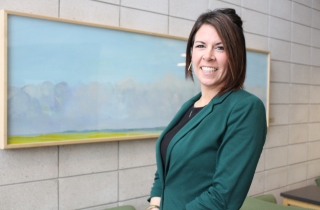 A program better equipping Saskatchewan's public libraries to provide legal information has proven to be successful, well attended and lauded by lawyers, says an organizer.

Launched in March 2016, the Saskatchewan Access to Legal Information Project (SALI) continues its aim to increase access to justice by enhancing online legal resources and lawyer-led info sessions in public libraries across the province.

SALI also provides training to library staff on the information being offered, how to help people find it and when to point people in the direction of a lawyer for additional help or advice.

Developed by several project partners, including the Public Legal Education Association of Saskatchewan (PLEA), the Law Society of Saskatchewan Library and Pro Bono Law Saskatchewan, SALI is being made available to all of the province’s 300-plus branches.

The sessions, says Newsham, have been well attended and have resulted in people being better prepared when it comes time to sit down with their lawyer.

“I can tell you that ... when we refer people to legal aid or [Pro Bono Law Saskatchewan], we’ll tell them, ‘Here’s the forms you need. Why don’t you start working your way through it, there is a wait time and you can use your time more effectively by the time you get to see your lawyer.’ And we’ve had a couple of legal aid lawyers tell us [that clients] seemed more prepared when they got there.”

Lawyers have been praising the program, Newsham said.

“They are certainly aware of them and I think they are spreading the news positively. I’m of the view that if they weren’t valuable, we would hear about what a waste of time they were from somebody.”

Melanie Hodges Neufeld, director of legal resources at the Law Society of Saskatchewan, said most of the information being sought at libraries is around family and estate issues — what forms are needed for a particular matter, for example. Information on criminal law is also available, but to a limited extent before actual legal advice is needed.

A librarian trained under SALI, she said, can act as a “trusted intermediary” for those leery of engaging the justice system.

“What this is going to do, especially in some of our smaller and more remote communities, is that it is going to give people that trusted intermediary that they can deal with — that would be their public librarian,” Hodges Neufeld said. “In some communities, we’re finding that it’s not even that they just can’t afford a lawyer, but also that they don’t trust people from the justice system. I’ve been involved with other projects where we’ve gone and tried to run clinics in some of these areas and nobody wanted to talk to us. But they’ll go and talk to their librarian because they know that person and they’re embedded in the community.”

And SALI can assist those simply wanting to arm themselves with some knowledge before meeting with their lawyer, she said.

“We’re living in a generation … that wants to do a bit of self-help, or at least self-education. Even if they are going to go and see a lawyer, they’re wanting to get that education first. It’s perhaps providing the ability, in some situations, to self-represent, if that’s what they’re interested in, and [to understand] a bit more about the law and what is available for them.”

Brea Lowenberger, director of the Centre for Research, Evaluation and Action Towards Equal Justice and access to justice co-ordinator with the University of Saskatchewan’s College of Law, called SALI a “critical project” when it comes to connecting with “everyday people” in urban, rural and remote areas.

“When it comes to even identifying or addressing whether one has a legal problem, there are very few public spaces left that are accessible, and so we’ve chosen to focus on public libraries as a free, open space where there are trusted intermediaries, who are trained and credible information providers. … I see this as a critical project in meeting everyday people where they are at … and empowering and equipping [them] with legal resources.”

The SALI project, she said, is indicative of a growing movement toward equipping more front-line service providers to guide people toward legal information.

“I see this extending beyond public library staff to other front-line service providers,” she said. “There are many different examples of work going on to equip front-line providers — community-based organizations, health care providers and others. But what makes partnering with public libraries special and unique is they are already credible information providers and are one of the few spots left that people can go to both receive information with a live person, as well as have resources such as a computer and other materials available to assist them.”